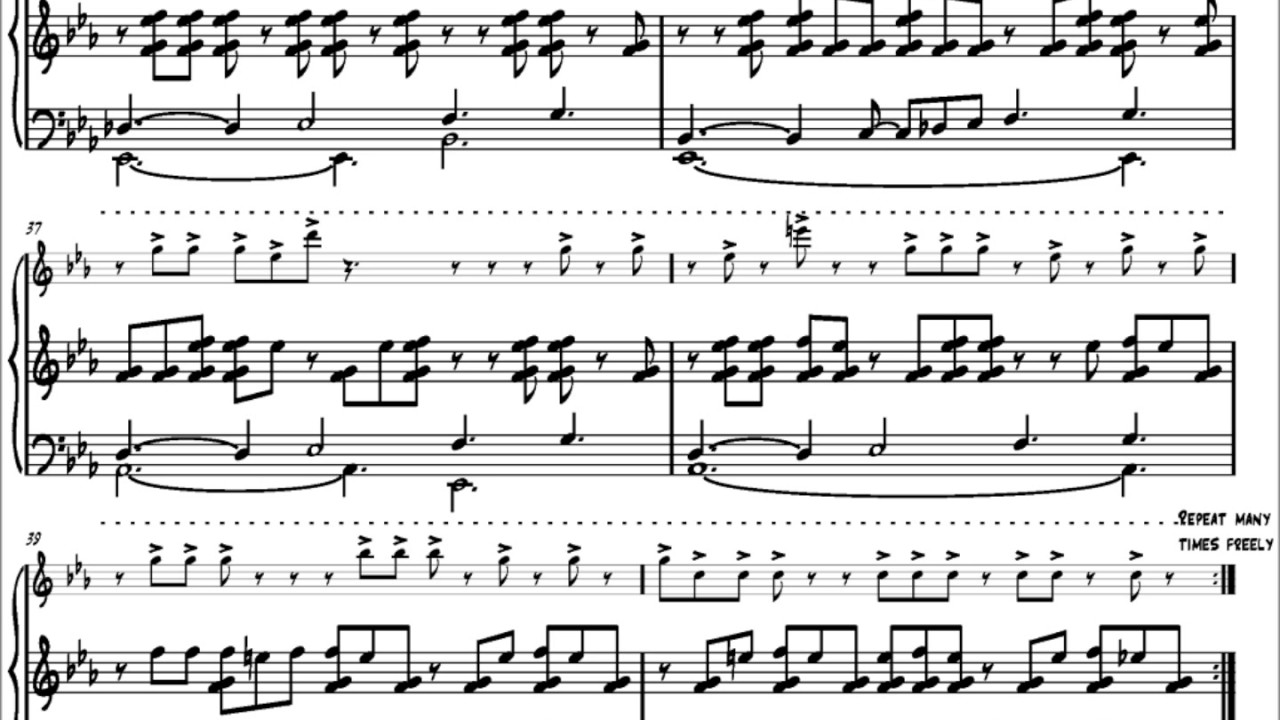 Transcription:,,,, Recording: OKAY Soit’s been a while. I’ve transcribed and learned many solos since my last post, but I’ve also started teaching at McNally Smith College of Music in St Paul and have toured with several bands all over the world since then too, so it’s been a little crazy. Naturally, the solo that would make me want to post here again would be a.flute solo? A flute solo. SKM, meet Elena Pinderhughes.

I’ve been checking out Elena’s stuff since I starting learning one of her solos on a Christian Scott album. The thing that stands out the most about her playing is her feel. Her feel is ridiculous.

I learned this solo by ear first and played along trying to match her feel throughout the solo. That’s recommendation #1 from me as you start to learn this solo. That’s not to say her note choice isn’t – how did Ferris Bueller say it? “choice” – because it is. Not unlike a trombone shorty solo I transcribed a while ago and posted here, Elena primarily uses the pentatonic scale throughout her solo, with a few major/natural minor scale uses and a couple spots where she’s playing borrowed pentatonic scales.

(“” by is licensed under ) Audio clip: Adobe Flash Player (version 9 or above) is required to play this audio clip. Download the latest version. You also need to have JavaScript enabled in your browser.

[Thanks to Spencer Ritchie for this post! Check out more of Spencer’s transcriptions on his blog ] Check out Lewis Nash’s chorus on his arrangement of “Monk’s Dream” off his 1989 Album “Rhythm Is My Business”. This whole solo is accompanied by Ron Carter’s steady walking bassline, so when trying this solo, lock in with the walking, but keep an ear open for Nash’s phrasing and attempt to mimic it. The Adobe Flash Player is required for video playback. (The solo starts ~1:23) Download the transcription: [Check out more from Ben DeVries at ] I still haven’t decided which is my favourite track on Roy Hargrove’s ‘Earfood’ – either “Strasbourg St. Denis” or “I’m Not So Sure”.

Or was it “Starmaker”? I started writing out Roy’s solo in “I’m Not So Sure” some time ago already, and then shelved it. I’ve finally got around to finishing it and digitizing it in MuseScore. What struck me immediately as I was writing out this solo was the sparsity of notes and delicacy of the phrases at the beginning, followed by sudden outbursts of expressive lines (like bars 21 and 31/34). What I’ve noticed from my own playing is that I often play far too much in trying to find my way through the changes, so this is definitely a lesson to take home.

Writing out phrases such as bars 5, 21-22, 36 and 44 actually doesn’t do the solo justice, and they shouldn’t be taken too literally (as with most solos, I’d say). These lines have their roots in soul and gospel – the kinds of phrases that make you want to jump out of your seat and shout “AMEN!”. Audio clip: Adobe Flash Player (version 9 or above) is required to play this audio clip. Download the latest version. You also need to have JavaScript enabled in your browser. Download the PDF: This post was very generously provided by Marc Adler, a fantastic flutist and pedagogue out of PA.

The above track is off the album played by, flute;, piano; Darryl Hall, bass; Butch Reed, drums; and, trumpet. Marc sent along a “brief” analysis of the tune (below) which may not look brief on first glance, but compared to the subtlety of the recording it’s just the tip of the iceberg. And since we’re already getting the inside scoop on the music theory behind this tune–the skeleton of the music–I took the opportunity to ask Marc about the soft/squishy side of the music. Download the transcription: Listen! Watch Italo’s Transcription Video! This solo is a masterpiece by Wes. There’s everything you’re used to hearing in his improvisations: Double stops, quartal structures, tritones, pentatonic ideas, dorian phrases, fast and wide arpeggios and his famous octaves all along his last choruses.

That’s probably because it was recorded in 1965 (only three years before his death, in June 15th 1968 – 45 years ago) with the wonderful Wynton Kelly Trio. It’s really a solo to remember by all guitar students and improvisational musicians. Download the Transcription: Watch a video of the solo being performed by Derek!

Herlin plays with triplet vs. Sixteenth and straight vs. Swing ideas, and moves in and out of downbeat and offbeat oriented phrasing. All of which reflect the similar off-kilter effect the tune’s melody has. Also, notice the two busiest portions of the solo, (m.49-56 and m.73-76). The first example phrases triplets, with the latter phrasing sixteenths, demonstrating smart soloistic flow and development.

With its phrasing, and creative rhythmic ideas, this transcription stands out as a fun and excellent example of musical drumming. Dowlnoad PDF: This submission is of an iconic solo played by John Coltrane and if you’re any kind of jazz fanatic it’ll be very familiar, but seriously–watch the video. Adam Spiers plays along with the solo, note for note, on the cello. As a cellist I find it difficult to describe just how insane this is, but to put it in perspective it’s kind of like climbing the stairs of the Empire State building in flip flops; it’s not impossiblebut yeah.

I’m very humbled to be posting this incredibly thoughtful and meticulous transcription along with such an amazing video, but unfortunately for you horn players out there the transcription is in C and an 8ve down. But you should still follow along and check out this amazing video and transcription. Probably twice. With Adam’s permission I’ve pasted in the body text of his blog post on this transcription, which can be visited at its original location here:. Download the Transcription: Audio Link: “August Ending” Brad Mehldau For nearly two decades, composer-improvisor Brad Mehldau has left a prophetic mark on the music of our generation. One supporting reason is that his music strikes an emotional, spontaneous core while maintaining a structural quality evident through analysis. House on Hill was released by the Brad Mehldau trio (Rossy on drums) in 2006, and the opening track, “August Ending,” illustrates Mehldau’s search for “successful integration of composed and improvised material.”1 Feel free to decide for yourself, but I’m pretty convinced he’s on the right track.

The composition is bound together by a string of 8th notes (A-Bb), which while fitting colorfully into the harmony serve several foundational purposes throughout the tune. Download the Transcription:,, This is a transcription of Kenny Garrett’s (the REAL Kenny G!!!) solo on “There will never be another you” from Woody Shaw’s album, Solid (2009). Garrett does a great rendition of this often heard standard. Listen to his style and the way he shapes notes and phrases.

There are a great deal of scoops, accents, and slurred passages that will be thrown at you, which is always fun. Also, listen to how Garrett uses rather simple, yet effective forms of chromaticism and “going out” to give this tune a nice remastering. Download the Transcription:,, This is actually an alternate take of the Jobim standard Corcovado done by Julian “Cannonball” Adderley from the album Cannonball’s Bossa Nova. It has got to be one of my favorite albums of all time, and Cannonball shows why. Fl Studio 12 Crack Reg Key Fl. He has a very effortless way of playing, especially when attacking a difficult passage. Please do listen to the recording to hear this.

While I may have notated all the notes, Cannonball does a great deal of “ghosting” notes throughout the section, gliding from phrase to phrase. Challenge yourself not only to perform the notes with accuracy, but also the the style in which Cannonball presents them.

I got an email about 2 weeks ago from someone in Europe (I can't remember where - Denmark, I think) asking me for a copy of my transcription of Brad Mehldau's Goodbye Storyteller (for Fred Myrow) (listen to the piece below), a solo piano piece from his incredible album Elegiac Cycle. After some searching, I found that unfortunately I never entered it into Finale or Sibelius. Also, I did that transcription at least 7 or 8 years ago, and I've moved 5 or 6 times since then, meaning the chicken scratch manuscript is packed away somewhere.

I know I still have it, because I've seen it since moving to the flatlands, but I have yet to dig it out. Stephan, if you're reading this, I'm looking for it, and I need to enter it into Sibelius before it's even worth sending out. My apologies - it might be a while yet! But this got me thinking: what else have I transcribed that I haven't touched in a long time, haven't entered into Sibelius, or could revisit with some more musical maturity? I found my transcription of Mehldau's Bard (opening track from Elegiac Cycle), and I took some time over the past 2 days to re-enter it into Sibelius, with a better understanding of harmony and notation software. I need to proof it (some things sounded wrong on the playback, but it's too late to worry about them tonight), then I'll be posting a PDF of that transcription.

I'll probably post a lead sheet to his Song-Song, and also look for The Bard Returns in the relatively near future. (In case you're wondering, yes, I went through quite the Mehldau phase for a few years.

I'm over the obsession now, in fact I haven't listened to him deeply in quite a while, but I'm slowly incorporating him into my playlists.) It also made me think about how much I enjoy transcribing piano music. Yes, it can be a painful process, and at times I want to throw my then-Discman/then-iPod/now-iPhone at the wall, but I also find it very rewarding. In a way, it's like solving a puzzle, working with what I hear (or think I hear) and what I know (music theory) and making the pieces fit. (I feel that same way about music theory in general, but that's a conversation for a different time).

The Mehldau tunes were tough, and I'm sure I'm going to have to revisit Goodbye Storyteller to complete some illegible lines and things I mussed up, but I also like listening to some Taylor Swift or Five for Fighting, as two recent 'commissions' have required me to do, and get down what's going on. If nothing else, it helps me keep my ears open and also gives me the opportunity to connect with musical minds on a level that's different than playing through a Beethoven Sonata. With all this in my head, I'm thinking about things that I'd like to transcribe next. Working on big band charts and vocal tunes is nice, but they require at least one more person to perform, so I'd like to do something that I can do on my own, even if it's just in the practice room. If you have any good solo piano tunes (jazz, classical, etc.) to suggest, comment below. And listen to Goodbye Storyteller (for Fred Myrow).